This blog was started to chronicle a common goal over the last few years of my life – to make it to the Retired Racehorse Project’s Thoroughbred Makeover. To successfully take a horse off the track and retrain it for a specific discipline in 10 months’ time. To be a part of the change in the industry. To make a difference for just one horse.

And for two years, I could proudly check that box, having accomplished that goal.

In 2016, it was with Rebel Annie. A 15-something hand chestnut mare that I bought directly off the track 6 months prior to the competition. With a short let-down period and only a few months of training, Rebel successfully carried me around the Field Hunter division – a sport I knew nothing about. Her heart of gold and willing attitude helped me fall in love with the OTTB again, and I thank her every day for that. 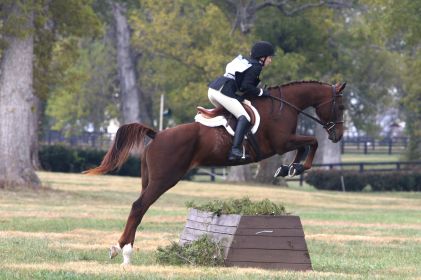 In 2017, I partnered with Hot Java. A horse more my “type”, this 2011, 16.1 hand bay mare came off the track in January after nearly 50 starts. Requiring significantly more let down but with just as much heart as Rebel, Java proved to have all the makings of an Eventer. But, having not truly evented in years, we conquered the Show Jumping division of the Makeover. Even though we placed solidly middle-of-the-pack, I saw something in Java and opted not to sell her as initially planned. Instead, Java lit that competitive spark in me and has me planning out goals that include Area 8 Championships, move-up’s and, ultimately, the American Eventing Championships.

Copyrighted by Xpress Foto. Any use w/o written permission from Xpress Foto is a violation of our copyright and subject to hefty fines, jail time, criminal record and legal fees. 920-619-8765

This year, my Makeover mount came to me from New Vocations. My first adopted horse and one that could not have been more different than the two in years prior. Cold Gone Hot, aka Tiny, was a 5 year old, 17.2 hand gelding by Tiznow. With high expectations on the track not coming to fruition, his connections graciously donated him to an aftercare program. With some mental baggage to overcome, Tiny hung out in my pasture for several months before I ever sat on him. And when I finally did this gentle giant showed me just how versatile a Thoroughbred can be. From earning a 70% at his first dressage show, to packing my non-horsey husband around on hacks, and taking home multiple ribbons in the hunter ring, Tiny would truly do anything you asked.

So, it was a bittersweet day when life decided it had other plans for me and it was clear that I would not be able to compete with Tiny at the Makeover this year. Instead, I sold my sweet boy to an amateur Hunter and withdrew from the competition. But among the things that Tiny taught me was that I could make a viable business out of training horses, and that my childhood dreams were actually taking shape. 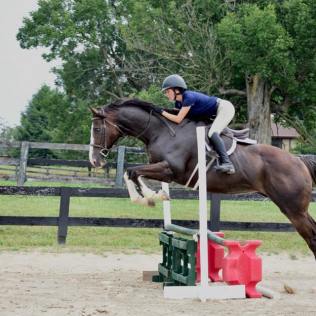 I find myself this year attending the Makeover horseless for the first time. And as I meander around the grounds, volunteering my time with the wonderful organization that is the Retired Racehorse Project, helping other competitors whenever I can, and taking in the buzzing atmosphere at the park, I thought I would be sad that I couldn’t check that box this year. I thought I would be disappointed that I didn’t “make it” to show off all of my hard work with Tiny.

But instead, I’ve realized that “making it to the Makeover” was never about the competition anyway. Over the past three years, while I thought I was making over a Thoroughbred and showing them a new career, they were all actually making over me. Each horse taught me something different and helped me grow as a rider, trainer and person.

While I thought I was making Rebel Annie a Field Hunter, she was actually helping me find my passion again. When I showed Hot Java a new career in Show Jumping, she was showing me my hungry, competitive side. And as I brought Tiny out of his shell and let him find success him multiple rings, he let me realize all I could be – and all I already was.

So congratulations, ponies. Whether you stepped foot onto the Kentucky Horse Park grounds to take on the competition of hundreds of other Thoroughbreds or not, you’ve all checked the box. You’ve all done your job and accomplished the goal of changing me, of making a difference for just one person.

To contact Lindsay or for more information about training services including training, lessons and sales, please click here.