Sitting at my desk one slow June day I aimlessly surfed the web, opening up Craigslist and typing “Horse” into the search bar. I had one empty spot in my pasture and was very casually looking for a project. As my eyes danced over the screen, they quickly stopped on an ad that read “Percheron Cross Filly”. I wasn’t much for drafts, but knew the right cross could make a nice Eventer, so I clicked. The ad read 3 year old Percheron x Thoroughbred filly, with one unimpressive picture and a price that invited the worst of buyers.

Following my bleeding heart, I hopped in the truck and drove an hour to look at the scraggly filly. I figured worst case scenario, I could save her from the wrong hands. Best case, she would make an awesome Eventer and a fun summer project.

When we arrived, a herd of horses greeted us, including one homely filly that was barely above pony-sized, definitely not 3, and in the ugliest stage of her development. Her sun-bleached coat and long mane were easy to overlook, her size and age made me wonder what I was doing there, and when she wouldn’t let us near her I was ready to head home. But as she dodged our attempts to catch her, my jaw dropped.

So, I wrote the check on her movement alone.

After loading up the nearly-feral, pint-sized “Percheron”, my mind wandered to all the possibilities. So what if I couldn’t catch her, her trot alone would win the Dressage. And it didn’t matter that she wasn’t even old enough to ride, I could just picture eating up cross-country on that uphill canter a few years down the road. It was hands down the most illogical decision I had made in a long time, but I knew this talented girl needed a place to shine and I wanted it to be in my barn.

As the weeks flew by, Raven proved to have not only amazing movement, but an incredible brain. Though she had never lived inside, she stood quietly in her stall. Having barely been brushed previously, she didn’t flinch at the curry or the pulling comb. As time went on, she began to flourish. The once unruly pint-sized Percheron was growing into a beautiful young lady.

I went about her training as diligently as I could. I tried my hardest not to skip steps and to create a foundation that I could build upon when she was ready to be backed. Her talent was limitless, and I promised myself not to mess it up. Every new question, she answered with ease. She learned quickly to lunge, carry tack, pop over little jumps and ground drive. And as I played with her, she just got cooler and cooler.

Until one day, it all stopped.

My star pupil came in 3-legged and my heart sank. The x-rays showed a chip in the most unexpected of places, which could have only been the result of trauma in the pasture. The most talented of horses, not even under saddle yet and an injury that can only be chalked up to pure bad luck.

Without a second thought, I opted to do the surgery, to cough up the thousands of dollars necessary to give her a chance. She was a lovely young horse with a bright future and I had promised myself to nurture that talent to the best of my abilities.

Several weeks of stall rest, bandages changes and hand-walking proved what I had known about her all along – she was special. Where the layup horses who had been living in a barn for years couldn’t handle weeks in a stall without medicinal intervention, my feral little filly was sweet as could be. She stood still for her bandage changes and quietly hand-grazed when given the opportunity. Even though my bank account questioned me, I knew I had made the right decision as brains like that don’t come along very often. 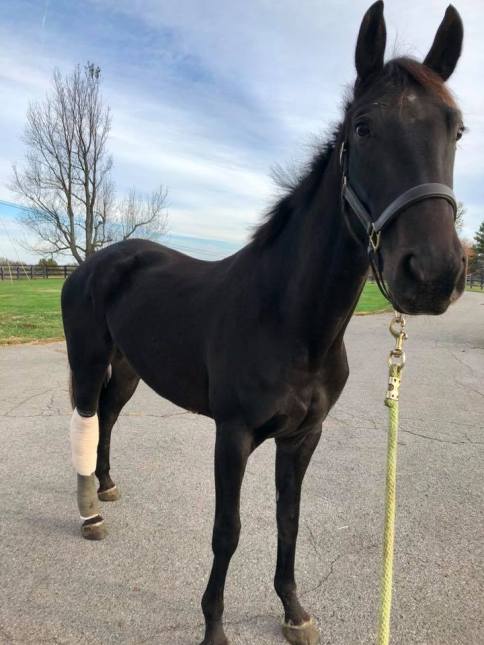 Stall rest completed, hand walking done, and small pen turnout introduced – things were starting to look up. I had my girl back. With my plans only slightly derailed, I was eager to give her the winter off and start back up slowly in the spring. It was only a small bump on the incredible journey I knew she would have.

Until one day, I noticed a small hitch in her stride as she was coming in for the night. I asked for an x-ray just to be safe. And when the vet mumbled “oh, that’s not good”, my heart sank for a second time.

As her injury healed, her body got angry. The aggravated joint laid new bone in a pattern that disrupted the movement of her tendons. One of the best surgeons and a diligent layup process, and nothing could have changed how her body reacted. It seemed that Raven had all of the talent but none of the luck.

The vet offered to continue with the layup, hoping that maybe over time the bone spur would smooth out and be less disruptive. But, maybe it wouldn’t. Knowing she may never even be pasture sound, he mentioned the “E” word. And if my heart wasn’t already at rock bottom, it sank even more.

With all of my dreams for her crumbled, I questioned what the best choice was. Yet, I knew she deserved dreams of her own. Talented as she may be, Raven never asked to be an Eventer. She never imagined galloping big tables and prancing in the Rolex arena. Stunning as her movement may have been, her true talent lived in her mind. A quiet intelligence that cannot be replicated.

So, she’s on to better things. Now living the life of luxury down South, Raven will pass on her biggest asset to the foals she helps raise when she’s old enough. She will act as an integral part of a top breeding program that produces upper level Dressage horses. I guess it turns out she’s pretty darn lucky after all.

To contact Lindsay or for more information about training services including training, lessons and sales, please click here.